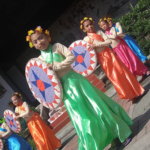 Tabak Festival is the newest addition in the growing list of festivals being celebrated in Malabon City, in the tradition to honor San Bartolome.

During the event, the parish organizes a caracol competition. Every year, Acacia Elementary School tops and bags gold in the same event. Year ago, in 2013, Acacia won as the 1st place in the caracol dance competition. In 2014, They won the best in costume which was the only  award at stake during the event. In the year 2015, Acacia Tabak dancers won as champion again.

Acacia Elementary School is considered as the hall of famer in the events garnering a three-year back to back win in elementary division.

Acacia Elementary School is always invited in the annual celebration of   Tabak Festival and became one of the performer dancers for their  Caracol.

There are 21 schools both from elementary and high school  performed during the event. The first performance is done along the street and the other is to be performed on stage.

REPUBLIC OF THE PHILIPPINES

All content is in the public domain unless otherwise stated.

Learn more about the Philippine government, its structure, how government works and the people behind it.

Scroll back to top